After a rainy week in Seattle, and after SPU filled some of the non-functioning ponds with dirt, we have noticed new patterns that belie the ability of any of these ponds as a CSO resolution. 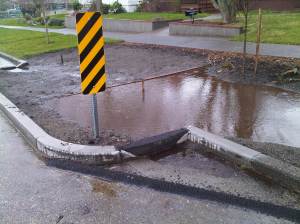 That volume of water has to go somewhere. Where it can’t go is into the clay ground underneath.

Building underground drainage would only attempt to push the water into cement-like clay, or drain this water into the sewer. The latter option is less of a CSO resolution than just holding this groundwater in a very soggy lawn.

The first Kingfisher (bird) has been spotted in our neighborhood. According to our long-term residing neighbor (62 years), this is the first one she’s ever seen on our block. Maybe they’ve heard the word there are ponds here now?

On 31st Avenue, the water meters had to be moved out of the planting strips to accommodate the bio-retention ponds. A neighbor sent these pictures of the cement job done when sealing them into their new position on the sidewalk.

We certainly hope this is not the quality of work we should expect on our streets and curbs if/when any bump-outs are removed.

This blog previously stated funding for the Ballard Roadside Raingardens came from the Federal Stimulus Bill.

We found documentation that requires clarification to this: At least 50% of that Stimulus money is a loan at 2.9% interest, to be repaid over 20 years, with an additional $200,000 provided by the City of Seattle. The Washington Department of Ecology is the pass-through.

The blog has been updated to reflect this clarification.

Lots of work is being done on the Raingardens right now…

The message from SPU is they are filling in the holes that have standing water “temporarily” until the Task Force can convene to make decisions about the final design. Some cells are being filled, but some are being excavated. From the 02/25 SPU update, SPU stated they would replace the biosoil on 29th once they were done on 31st–but they are not done on 31st yet. It seems the biosoil is being replaced, but then the cell is being compacted (that won’t help with drainage). This has led to much confusion and speculation in the neighborhood.

SPU seems to be working without informing the community exactly what they are doing and how this will help–all before the initial meeting of the Task Force.

Note in the first picture: the hole clearly shows the Vashon Glacial Till (clay).

From some neighbors’ perspective:

“Just thought I would update you all on what I saw this morning. A few days ago, the City filled the western-most cell of the raingardens on 77th just east of the alley. For the last several days, although it was filled, the cell has had a pool of standing water in it because there was still a depression in the cell. This morning as I was leaving, two City workers were siphoning the water out of the cell with a hose and pump and pumping it into the western-most cell of the three cells on the west side of the alley. So the hose was running across the alley and two cells into the third cell. This is the cell that….then drains into the sewer drain. I thought it was pretty ridiculous that they had to pump a ‘filled-in’ cell. Even more so that the sky has just completely darkened and it looks as if we are going to be dumped on again.”

“A funny sight today. Picture five City workers standing in the ‘garbage pit’ (on 77th) pumping it out with a small pump in the pouring rain!!!!  Isn’t that what they call counter productive???”

“So I just….did a little tour of the ponds. As I drove up 28th, [Earthcorps was] trying to drain (unsuccessfully) one of the cells with a garden hose and 10 gallon bucket, I kid you not. BUT, more importantly, this same crew has started excavating the ponds on 77th.  Did you know this was going to happen? On 31st they have parked a construction trailer. Looks like they think they will be here for a long time….I mean, they have removed the vegetation and are removing the soil…!”

Did SPU Know About the Signage Ahead of Time?

Since September 2010, when the signage was installed, SPU has claimed at community meetings with Councilmember Mike O’Brien and Director Nancy Ahern that they “goofed” and didn’t know SDOT would require caution and No Parking signs around the bio-retention pond bump-outs when the decision was made to install the ponds. Residents argue this signage devalues the homes, alters the neighborhood, and generally gives the unattractive feel of a construction zone–not to mention the residents were never informed of the signs ahead of time, particularly in the pictures distributed to serve as examples. SPU’s defense has remained they didn’t know about the signage either.

We found plans signed off by SPU in November 2009 that show the signs and quantity. It seems the signs were always part of the installation plan.